How much does the average app cost?

How much does an app cost to develop in Ireland?

This is a question we get all the time.

Today we are going to look at a ‘Basic App’ which will cost between €2000 and €5000 euros for development and deployment.

What is a Basic App?

A basic app can mean different things but we define it as a mobile application deployed to one or more platforms with static information, limited business logic and public access for all users.

Why get a Basic App developed?

There are a number of reasons why you might want a basic app.

For example, you could desire an MVP product to show investors, something they can see and touch. You may desire a brochure app outlining your products, services or business details.

Perhaps you want a simple app for showcasing content with links to your website for booking courses or making purchases.

Either way, getting your app out there puts your business in a whole new directory where new customers will find you.

This differs depending on your business however, many basic apps share these features:

Other Kinds of Features.

Examples are calculation tools which take in user input and produce results.

A feature where users can write and save their notes on their app.

A Tracker or Diary Feature

This comes in many forms but basically allows a user to enter information or choose from options (e.g. different emojis) on a regular basis and saves their history e.g. a mood tracker, a food diary.

What is App Publishing?

You might here this term a lot. It means releasing your app to Google Play, Apple App Store and other places where users can download it.

The process with Google involves the following:

Google charge a once off fee to have a developer account. Some app companies cover this as part of their publishing process, sometimes this is an extra fee for you to pay.

Apple App Store submission is similar to Google except that there are a few more complexities in terms of app signing and the actual approval process often takes longer and is more likely to require changes to the app to get approval (less likely with experienced App Development Companies).

Apple charge a yearly fee to list on the App Store ($100 per year at present). Again, depending on the company, this may be included in the App Development fee.

By now you will have a better understanding of what is a basic app and how much app development costs for something like this.

If you want to get in touch with us, we can give you a ballpark figure for your app or start the discover process where we come up with a plan for you!

PrevPreviousWhat app features do you get for 20,000 euros?
NextHow Much does an Augmented Reality App Cost?Next 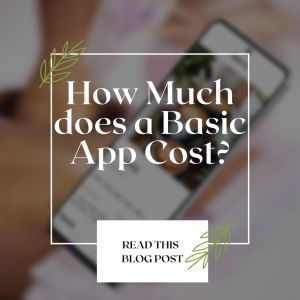 What we’ll cover… How much app development costs What is considered a basic app What is not considered basic  How Many Pages Navigation Page Content Examples of Basic Apps Store Publishing Maintenance How much does the average app cost? How